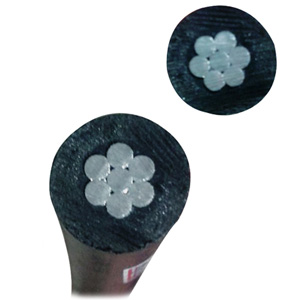 The original material of abc wire

As we all know, aluminum is an important original material of producing abc wire and cable. China’s original aluminum production reached the top one in the world at 2001. Since 2001, China’s original product has been increasing gradually. So in the price of aluminum material, China has the definitely advantage. In China, the aluminum price of henan province is the lowest, and the price of Gongyi city is the lowest. Huadong cable adopts the most preferential aluminum material, and the cost of the production is the lowest. We can know, in the abc cable price list, Huadong Cable Group has the price advantages. As a China 0.6/1kv abc cable suppliers, Huadong Cable Group sale the abc power cable directly, and don’t have other extra fees. So huadong cable is more competitive in the abc cable price list. Choosing Huadong Cable Group will be the most economic way for you. If you want to know the accurate abc cable price and details, please leave your message, we will contact you later. Email: sales@huadongabccable.com.

The producing and inspecting of abc wire

As a professional abc cable suppliers, huadong Cable Group has several-year abc wire and cable producing experience. The plant was found in 1998 and occupied 50 000 square meters. Huadong adopts advanced equipment to produce abc power cable. It has 20 sets production lines and 25 sets testing machines, with many professional researchers and workers. If you want to see the factory picture, leave your message, we will send you later.

In the every production process, Huadong Cable has strict quality inspection. Abc conductor production process quality inspection is in accordance with the requirement of production plan, process instructions and procedures rules. It concludes first inspection, tour inspection and completion inspection. It can prove that Huadong Cable Group is an professional abc cable manufactures. Before starting manufacturing the abc wire, the worker firstly does the first inspection. It was aimed to find problem, solve problem and make the preventive measure. To avoid the abc wire and cable was disqualification. For, example, before producing abc power cable, the worker should check the temperature of extruder, and test if it can produce the abc wire and cable. When worker finds the abc conductor is disqualification, he will analyses the the cause and make the preventive measure. Supplying the high-quality abc wire, this is the first step. Huadong cable always adhere to all steps of producing the abc wire and cable, and you can get rest to send the inquiry. We will contact as soon as possible. Email: sales@huadongabccable.com.

Tour inspection is to check the producing process of abc power cable. Some tiny mistakes will make big problem. In the process, the inspector should master the every specification of abc conductor, so he can find the problem instantly. Timely tour inspector is another important sector to prove the abc cable specification is qualification. Completion inspection is to check a semi abc wire whether fits the abc cable specification. The worker adopts measuring and visual to analyse and judge the semi abc wire and cable. As a abc cable suppliers with high-quality, Huadong Cable Group gradually improve ways of producing and inspection. High quality is our aim forever. If you are interested in Huadong cable, you can leave your message and visit our plant. We will send you the address later. Email: sales@huadongabccable.com.

The packing and shipping of abc wire and cable

In the package of abc power cable, you can choose wooden drum, plastic drum and paper drum to pack the inner packing of abc conductor. As for outer packing, you can make a choice of carton box or pull out box. Of course, if you don’t like all above packing ways of abc wire, you can choose the way you like.  As an professional abc cable manufactures, we can customize for you. Email: sales@huadongabccable.com.

The export of abc cable conductor of Huadong Cable Group

As a professional abc cable suppliers, Huadong Cable Group strictly adhere the GB, IEC, BS, ICEA, ASTM standard to manufacturer abc wire and cable, and also we can design and produce abc power cable according to customer’s requirements with low abc cable price. We have exported wire and cable to European, South America, Middle East, Africa, Asia, Oceania countries and ect. We also cooperates with some abc cable manufacturer in Malaysia, and it get good feedback. We also manufacture abc cable malaysia standard. According abc conduction specification, we can customize your satisfied abc conductor. Huadong Cable Group is a lead abc cable suppliers, so it  will be your optimal choice.Push the button, leave your message, you will get the best abc wire. Email: sales@huadongabccable.com.

Our advantage: Huadong cable group is a one of professional cable & wire factory in China,mainly production and sales cable, it located in the industrial zone in Zhengzhou, it has rich aluminum resources in the word, high quality and competitive price.

Please feel free to leave your requirement, We will reply you in 12 hours.

1.what is our payment term ?
Our payment term is usually T/T 30% in advanced, the balance before picking up the goods or L/C at sight.
2.what is the lead time ?
The lead time usually is 10 – 30 working days.
3.what is the package of the cable ?
The package is usually wooden drum or steel wooden drum or coil.also according to customer’s requirment.
4.Could we provide the free sample for customer ?
Sure, we provide the free sample for customer to checking.

Scroll back to top